What a great season but now back to zero..!

What a fabulous season we have had – it’s not often that horses keep their form for the whole season but that is exactly what they seemed to do with us enjoying winners every month since the season started back in May.

To have 10 winners by the end of June and to add 6 more in July was an unbelievable start and we continued throughout the end of the summer and into the autumn with November our best month of the season with 8 winners and December not that far behind adding 5 winners to our total. Our strike rate was often 23% / 24 % and finally we ended with 43 winners and a 21% which we are very happy with indeed especially as 54% of our runners finished in the top 4. Our strike rate is joint 8th Nationally too – our team can be so proud of all these statistics. 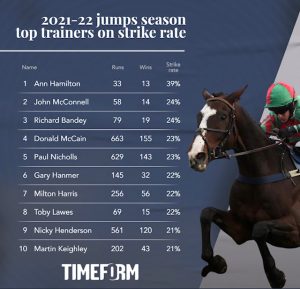 As I mentioned in my Newsletter last Saturday (please do get in touch if you’d like to receive it but aren’t on the mailing list) our success, I’m sure, is down to so many people that we are fortunate enough to call a part of Team Keighley. All the team that are here every day have worked their socks off and it’s down to their dedication and also our support team too that all work so closely to ensure the horses are as happy, fit and healthy as possible for every race they run in. Our Owners, who we obviously couldn’t do it without, have been so supportive too and I’m so grateful to them all. I’m also sure that because, more than ever before, we have such a talented selection of jockeys that come in regularly and know the horses inside out, and I’ve had the freedom to match each horse to an individual jockey, that this has also contributed to our success.

Back On The Lash, who won 4 times during his Novice Chasing season but also on his debut over the Cross Country fences at Cheltenham in November, has been the stable star this season winning the most prize money but you may be surprised to learn that in 2nd place in terms of prize money was the legend Mr Mafia whose 3 wins from 9 runs earned his owner Peter Boggis over £22,000. Not bad for a 12 year old (now 13!) summer jumper! He also broke, and still retains, the course record at Market Rasen and we’ll hopefully have lots more fun with him this summer.

One of my best days, or evening in fact, has to be the evening in July at Southwell where we eventually trained our first treble. We’ve had plenty of doubles including three times at Cheltenham but never a treble…until that night! It was a pretty special treble too as all three horses – Debden Bank, Dreamsundermyfeet and Pinnacle Peak, were celebrating their own individual trebles too – a feat we believe has hardly been achieved in handicaps before.

Dreamsundermyfeet, like Back On The Lash, also won 4 races and we had a few others on 3 wins too in addition to Debden Bank and Pinnacle Peak with Mr Mafia, Pay The Woman and Ten Past Midnight all winning 3 races.

Lots of horses won two; Ben Buie, who also was the horse to beat our previous best total of 34 when he won at Leicester, Ollie Ryan’s lovely mare Found On, Mozzaro, who is unbeaten in two starts over fences, Breizh Alko, who at 11 years old rolled back the years twice & has a 100% strike rate when partnered by Champion Jockey Brian Hughes, Brorson, who ran such a huge race in defeat at The Festival for David Maughan, The Meagher Family’s tough mare Kazontherazz, and the ill-fated and much missed Sarasota Star, who was such a promising individual and whose loss was a bitter pill to swallow. It’s terrible days like those that are why we try to ensure we celebrate all the good days in good style.

We have such an exciting team to head into the new season with. Plenty had mid winter breaks and so we have more in than we’ve had before at this time of year so we need the weather gods to be kind and send us some rain so that we can run them! Our owners were certainly rewarded last season for their patience in previous years, and I hope that this will continue with those that have now gained confidence continuing to build on their performances and also some more youngsters that we’ve been patient with stepping up too. We can’t wait!

With Back On The Lash missing Sandown on Saturday and David Parry kindly offering Harry 2 tickets to Man City’s game, I was able to go with him whilst Belinda & Freddie chilled out in a nearby Manchester hotel watching Sandown on TV (& Freddie watching his team Man Utd get beaten!). City’s game was unbelievable winning 5-1 and Jesus scoring 4 so it was certainly a match Harry will never forget.

Yesterday we took the boys to the National Football Museum which was superb and we can highly recommend. Whilst it took me two goes to register on the leader board for the penalty shoot out, Harry went straight to the top and was still there when we left!

It was then back to the Ethiad for Harry’s Christmas Present – a Tour of the Stadium and that too was very good. The Tour guide was brilliant and it was so interesting to hear how much thought went into designing the Stadium to try and give Man City the home advantage – we heard a lot about City’s Manager Pep Guardiola and his positive thinking and all the “1% differences” that they feel have led to their success. When people ask me what we have done differently this season to others I also think instead of it being one big change it is lots of little changes or improvements that we’ve put into place which, when put together, are the difference between winning and losing.

Whilst I thought I’d be gutted to go back to zero yesterday having been on 43 on Saturday, I’m actually really excited to try and get off zero as soon as we can and also to improve upon last season’s record breaking season. Obviously we’ll do all we can to beat 43 winners but we also hope we will be competing in bigger races this season for better prize money for our owners which will push us further up the Trainers’ Title which is decided on prize money. You can only win with what you have I know but we have a lovely bunch of horses and some, I’m sure, have so much more to achieve. Exciting times.