A stunning autumnal morning here in the North Cotswolds and some amazing shots captured from the drone. The proper winter season is just around the corner and our first horse was clipped yesterday – another sign of the colder weather arriving. 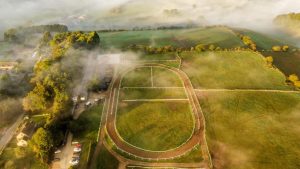 Great to see Mark and Eloise Boothright who watched Back On The Lash work under Beth Whittle who they have kindly allowed to ride him in her Charity Race at Warwick Racecourse next week in aid of The Air Ambulance. She’s been working hard on her fitness and is so excited especially as Lash is her absolute favourite! She’s counting down the minutes! The trophies won by Lash and Pinnacle Peak were too many for them to take home to Portugal on this trip – a nice problem to have!

James Best in yesterday and today and Warren Marston also in today. As well as Lash we worked Debden Bank, Samtara and Duke of Luckley. All the rest either did swinging canters or just cantered. We are fortunate that as we are a smaller yard we tend to not have set days for fast work but, instead, can adapt to ensure owners can see their horses do fast work. Therefore some can work on a Tuesday and a Friday whilst others can work on a Wednesday and a Saturday and it’s pretty straight forward to work around people.

We also enjoy owners calling in to see their horses and it’s usually not a problem at all. On Wednesday evening Debra, Julia and Jo, all from Foxtrot Racing Syndicates, called in at evening stables to see Witness Protection and Pay The Woman and have a catch up with us all.

Three runners at Worcester today with Novice Chaser Sarasota Star who made his chasing debut back in June at Southwell where I think it was just one run too many. He’s since had his summer break and seems in great form so with a clear round I think he’ll go closer than his starting price suggests. He now runs in the colours of David Bishop as David, Colin Bowkley and Paul Davis joined Jon & Jack Hughes in his syndicate over the summer and David was lucky enough to have his colours pulled out of the hat for the season.

Oliver Ryan’s Reve is our second runner and he reverts to hurdles after disappointing last time. Sean Bowen, who was on board when he last won back in November, is on board today and he seems well in himself at home.

Finally Brorson, who has finished second twice in bumpers since joining us in the spring, makes his hurdling debut, also under Sean Bowen. He’s had 3 runs in Point to Points and has done plenty of schooling at home and is a horse we like a lot. It’s a competitive race today but I’m interested to see how he goes as he’s one I’m really looking forward to seeing how he progresses this season.

Good luck to Kitty King who is once again representing Great Britain, this time in Switzerland this weekend on her lovely grey horse Vendredi Biats in the FEI European Eventing Championships. Kitty does her dressage this morning and the first two members of the team who did their dressage yesterday were in 1st & 2nd place overnight so a great start. Kitty’s father Peter owns Mr Mafia.

Well done to Harry Atkins, who joined us in the summer, who yesterday passed his two day Amateur Jockey Course and only has his concussion test and medical to go. There will no doubt be plenty of opportunities for him here over the season – he works hard and is a super lad.