The odds of our horses at Stratford last night were 20/1, 16/1, 10/1 and 14/1 so it’s safe to say that we were hoping they’d run well but weren’t confident we were going to have a heap of winners. However, it was a hugely successful evening and a fun one too with all of our runners really well supported by their owners. Stratford is our most local smaller track, with only Cheltenham nearer to the yard, and it always has a great family atmosphere and there are always plenty of keen racegoers there too.

Codey Jones kicked off proceedings under Sean Bowen for The 360 Racing Club and, whilst a 6th place could be looked at as slightly disappointing, he jumped well and Sean is convinced we ought to go chasing with him now where he’ll not only find the pace a bit slower but can use his super jumping to his advantage.

Debden Bank was our next runner and we were hopeful of a more encouraging run from him. Initially the plan was to try and make it with him as he loves it out in front however when James came across to us in the Paddock it was clear that most of the field also wanted to make the running and we didn’t want to get into a fight from the start. Therefore we decided to ride a much more patient race with him. Half way through the race he did seem to be a little bit too detached and we were a little fearful that he may lose interest however we’d not have worried as, despite being 20/25 lengths 6th and last of the remaining runners at the 2nd last, he galloped on resolutely to finish with a storming run and grab 4th place. That will hopefully have given him plenty of confidence so we look forward to having more fun with him. 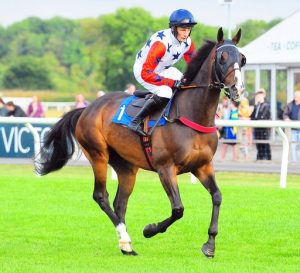 Forecast then ran for our Racing Club returning from 150 days off the track as he’d been affected by the pollen and had a holiday and he did look pretty burley in the Paddock, a fact not lost on the Racing TV Presenters! He’s an absolute dude of a horse although pulls quite hard so James did well to settle him at the back and get him jumping – something that has occasionally been a problem for him in the past and he crept him into the race on the final circuit. Lots of the Club got very excited when he smoothly moved into 2nd place turning for home however the eventually winner looked to be cruising. James had to throw him at the last and it was the only blunder Forecast made and he did well to find a leg and James did so well to stay with him and, whilst it knocked the stuffing out of Forecast, he did well to finish a good 2nd much to the delight of us all.

Finally one of the three foals we bought in November 2018, Borderline, ran in the bumper under his new full ownership of Mike & Mella Wright. He was bought at the same sale at Kalibrate, who has run once and Genovese who is due to run soon and it has been a fabulous journey watching them grow and develop. They’ve been backed and ridden away by Martin Jones and his Team in Spring 2020 and they then went out for a year and went back to Martin in Spring 2021 and then came into training as 3 year olds. Although a compact individual and a forward thinker that we thought would come to hand early, you have to be led by the horse themselves and they are all different, so surprisingly he needed more time which is why he’s only just made his debut when we were planning on a 3 year old autumn campaign. It did, however, give Mike and Mella time to gradually increase their shares in him and they purchased the last part of him very recently and were quite rightly proud as punch yesterday. Paul Davis, who spotted Borderline at the Sales and persuaded Gerry Hogan to come and look at him and all of us to also take a punt on him, was as thrilled and admitted he couldn’t be happier even if he’d owned him. What a great result.

Mike & Mella stayed locally and were in this morning to see Borderline (Sage) and also watch 1st and 2nd lot on the gallops and have a good catch up. Thanks to them for lots of goodies for us and the team.