The days seem to be flying by and we’ve just had a really fun weekend at Cheltenham catching up with lots of friends that we’ve not seen for some time. Unseasonably warm there giving Cheltenham’s team a headache with the ground. Great to have so many visitors here before racing throughout the weekend.

Back On The Lash loved the good ground yesterday and ran a massive race to finish 3rd in the Jewson 3m 3f Grade 3 Chase under a super ride from Sean Bowen who is oozing confidence at the moment. Lash looked a picture beforehand and gave his absolute all, making most of the running and jumping for fun. He’s only small but he has a heart of a lion and was a little wobbly coming back in needing lots of water – he’d tried so hard. Thanks to all the support we always get when we walk into our favourite winners’ enclosure – we always recieve a briliant reception and are so grateful for it.

Such a shame that the Cross-Country wasn’t run on the Friday due to the ground being too quick as Lash would have taken some beating. We’ll do all we can to get him freshened up to return to Cheltenham for the Cross Country race next month. 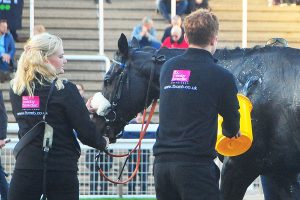 Happy Birthday today to one of Lash’s part-owners Karen Salters who shares her birthday with HM The King! Karen, and husband Marcus, sponsored the Shloer Chase won by Dan Skelton’s Nube Negra and one of their guests was English Cricketer Johnny Bairstow who the boys were excited to meet. 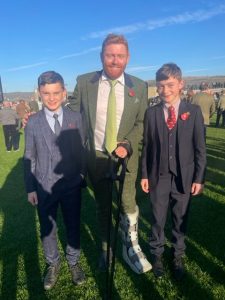 Forecast ran a belter at Cheltenham too giving our Racing Club such a fun day on Saturday. Under James Best, they kept out of trouble at the rear, as he switched him off and was slowly creeping into the race in the latter stages before not quite getting up the hill. If the ground was a little slower he may have picked a few off but we think he probably needed the run a little too and will strip fitter next time. He’s such a fun horse and is very kind too so a real favourite in the Racing Club. What a great day members had as owners on Cheltenham’s biggest day outside The Festival.

Belinda and I had a fun supper on Saturday night at The Sheep in Stow on the Wold with the syndicate that own Big Nasty. They are such a fabulous group and you can never fail to have a great night when you are in their company. We’ve been thoroughly spoilt over the past few days as we had another fun evening out with Nigel & Karen McAllen and Paul Davis at The Porch House, also in Stow – more delicious food and fabulous company.

I’ve not updated my blog since Found On ran at Bangor last week and failed to add a 6th win in a row to her fabulous five. It was her last chance to run in a valuable listed ‘Novice’ chase as she shortly loses her novice status so we had to take a chance that Cheltenham’s win hadn’t left it’s mark – something you often can’t tell until an actual race. She looked an absolute picture in the Paddock but I was never happy watching her and Sean said she felt flat. We hoped we’d get away with the holding ‘heavy’ ground there but it was a different heavy from the sloppy ‘heavy’ Leicester ground where she won a hurdle impressively and she was never happy on that either. She’s home safe and sound, owes us nothing after her brilliant wins culminating in her breathtaking Cheltenham win and she’ll have a good break now before maybe heading back there on 1st Jan.

Two tired boys went back to school this morning – racing is such a wonderful sport to be involved in. Where else could you mix with your sporting heros and have access to speak to them? Although there are far more famous faces in the crowd during Cheltenham’s Festival, throughout the smaller meetings often familiar faces can be seen and, of course, the jockeys are far more accessible for racing fans than most other sports you go to …. and children go racing FREE too!