An early start for the lorry heading for Catterick with Cut And Run and Brorson. Cut And Run is part of our Racing Club and isn’t a superstar but, can be competitive when it all falls right for her and she is a perfect horse to give 16 year old Harry Atkins his second ride under Rules. He rode City Never Sleeps on his rules debut and he gave him a wonderful spin but sadly an old tendon injury flared up and yesterday we made the inevitable decision to retire him – more about him later.

Harry deserves his chances as he works hard here and, although he’s only 16, has only been with us full time since the summer, he’s been with us for quite some years. The reason I mention this is because a few people have said to me how lucky he is to be given rides so early in his employment, however although I like to support my own team, he has certainly deserved the chances he is getting as he works hard and has helped us out over the past years too riding out and helping in the yard in school holidays and at weekends. Good luck Harry.

Brorson is our other runner and is a short priced favourite for David Maughan under Sean Bowen. He’s been unlucky to bump into one on several occasions and when he was 2nd at Cheltenham the winner has gone on to be pretty impressive since. He really is a horse that deserves to get his head in front and I’m hopeful I’ve found the right chance for him today ….but we all know it’s never quite as simple as that, especially in jump racing, but he’s in good form and I have everything crossed!

So back to City Never Sleeps and what a star he has been for the yard despite being so lightly raced due to his fragile body. No doubt the highlight was his victory at Uttoxeter which was captured so memorably in the wonderful photograph taken by Nigel Kirby, below. He ran a total of 19 times in his career, winning once, but being in the first 3 a further 9 times. He actually collected prize money in each of his last 13 races, stretching back nearly 5 years to March 2017. In his younger days, he even ran twice at Cheltenham for us – and as of this moment – has been in training at Martin’s yard for longer than any other horse currently in the yard.

Paul Davis, who runs our Racing Club and our in-house partnerships, is very fond of him – he was the first horse he ever bought (through Gerry Hogan) in order to partner him out. His ownership was the first under the Martin Keighley Racing Partnership banner (Martin Keighley Racing Partnership 1) . That ownership group saw him through his first 18 month absence from the racecourse due to a tendon injury, but when he incurred a second tendon injury he was gifted to Keighley Racing Limited for his second 18 month spell on the sidelines before coming back into training for the Racing Club. He raced for the Racing Club 11 times in total and his quiet demeanour in the stables and his thorough consistency on the racecourse meant that he quickly became a Racing Club favourite. We will oversee his full recovery here and then Paul Davis will have him and is looking forward to doing many different things with him as he enjoys a full, happy and well deserved retirement.

You may recognise a familiar face on the front of the Racing Post today! Thanks to Catherine Macrae for the piece and great photos, as always, from Ed Whittaker. 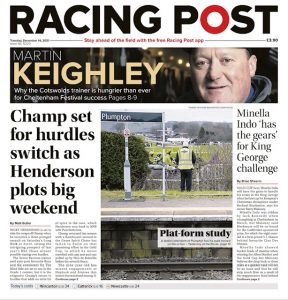 PrevPreviousAnother Southwell Double = 33 winners!
Next300 Jump Winners & 34 for the season – equaling our best!Next