No jump racing but so busy, busy here although I can’t believe I’ve not managed to do a blog for a week – apologies! Where do I start?!

Last Wednesday Ian Popham married Lerece Love and we joined them for a fun reception at Cider Mill Barns in Long Marston. Pops rode loads of winners for us including Annacotty’s Grade 1 victory at Kempton Park and Creepy’s Grade 2 at Cheltenham – a night we all remember well! Lovely to catch up with all the Popham’s and a really fun evening. We wish them both all the best for the future together.

Thursday was an early start, earlier for Belinda & Freddie in the horsebox, as Freddie & his pony Miss Millfield were racing at Great Yarmouth. I took Harry and we had a quick trip to the beach before going to watch Freddie ride a great race to finish 3rd. It’s such a great initiative and he’s learning all the time. He’s so lucky to have Miss Millfield on loan and at just 4 years old she is also gaining experience with every run. Next stop Wolverhampton on Friday.

Whilst I took the pony back home that night Belinda & the boys headed to Newmarket to stay with the Moore Family and Freddie was lucky enough to ride out two lots for Richard Spencer on Friday morning – his first experience on a 2 year old. They looked after him well and he loved it. Thank you to the Team at Sefton Lodge.

Friday evening we all went to see Roger & Yvonne Allsop and see all of their youngsters at their home near Ledbury. Then on for supper at Colwell Park which was delicious and lovely to have a catch up with Roger & Yvonne who have been such good supporters of ours.

David Maughan was in on Saturday morning to watch Spanish Present and Back On The Lash. David had called in with his family earlier in the week in the afternoon to see the horses in the field and it was the only 20 minutes of the week that it rained – typical! Great to see David and make some plans especially for Spanish Present of whom he’s the sole owner.

On Saturday morning Matthew and Carol Baker were in to watch the horses they are involved in and to take plenty of fabulous photos of them too. Matthew’s super mare Brianna Rose is still on box rest following her injury when falling at Southwell now about 6 weeks ago – she’s very fresh and a bit grumpier than normal but mending well which is the most important thing.

Karl Mitchell was in to meet Spice Boy for the first time and we are thrilled that he has decided to take the final share in him and so we welcome him and his wife Karen to the yard as owners.

On Sunday, thanks to Paul and Pamela Johnson, Freddie and I got the chance to go to Manchester United’s first game of the season at home at Old Trafford vs Brighton. A few of our owners were also there – Stefan Hibbert and his sons plus Phil Eaton who is in Big Nasty but we all had to endure the same game as Man Utd put on a disappointing display to be beaten 2-1 and their only goal an own goal by Brighton! The atmosphere before the game was superb though and Freddie had taken some money with him for the shop afterwards so came away happy! 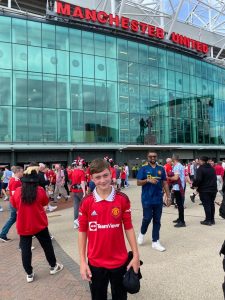 Last night Cheltenham Town played in the first round of the Carabao Cup vs Exeter City and it was another of their great initiatives where ‘kids go for a quid’ so we took the boys however it was another character building game with Exeter thrashing them 7-0! We bumped into Zoe & Abi Stock as their company, Typecraft, were the sponsors for the evening. 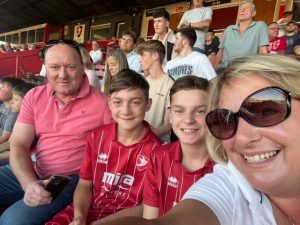 James Best was in this morning and Finn Lambert was in yesterday morning so two jockeys still hard at work despite the break from jump racing. We’ve also had Ben Brain in both mornings with his overground scope to check the wind on two of our horses which is fascinating to watch. The horse is galloped at speed with his scope attached to it’s bridle and Ben can monitor the horses’ breathing whilst we sit upsides it in the buggy and it allows us to see whether the horses’ breathing is stopping it from performing and, if so, what surgery, if any, is required. Ben as entertaining as ever.

Our busy time continues as today our Head of Travelling, Paddy Berkins, marries his girlfriend Abbie Myers. Abbie is often here on her days off from her job as a Police Woman and rides out when she can and goes racing occasionally too. A stunning day for a wedding and we wish them a fun and happy future together.