We always have a number of high-potential young horses for sale or syndication, as well as regularly taking commissions to buy at the leading sales in England and Ireland. With such an enviable record at Cheltenham, with over 20 winners and counting in the last decade, why not come and join us and #BePartOfIt. If you’d like to find out more about any of the horses detailed below, please contact us, or even better, come and view the horses at our yard in the beautiful North Cotswolds. Visitors are always welcome.

We are already searching for our next syndicate horse.  If you are interested in joining the distribution list to keep you fully informed of progress, then please let us know on keighleyracing@btinternet.com.  You can also send this email through the MAKE AN ENQUIRY box, below.

Sire
Idaho (Ire)
Dam
Seana Ghael (Ire)
Sex
Gelding
Colour
Bay
Born
2020
Idaho was a tough and talented racehorse who finished placed in the Epsom and Irish Derbies before stumbling and unseating his rider when the odds on favourite for the St Leger. He won Group races at 4 and 5 years of age before retiring to stud, This youngster is from his first crop of foals. Martin knows the dam's side of the family well and trains his 4 year old half brother, plus he is also half brother to the hurdle and chase winner, Classic Escape (OR 122) as well as the very promising Saquon who finished an unlucky 2nd on his debut in a hot looking bumper, his only race. He was bought by Gerry Hogan as a foal and sent to Batsford Stud to be cared for as a yearling and two year old. He was sent to Martin Jones for the first stage of being backed and ridden away, and Martin absolutely loved him, particularly commenting on the beautiful way he moved. He will now spend the next year in the field before returning to Martin Jones for the final stages of pre-training before entering full training in the summer of 2023. He’s an immensely exciting prospect and just to look at him quickens the pulse!

Sire
Ocovango
Dam
Minora’s Return (IRE)
Sex
Gelding
Colour
Bay
Born
2019
Watch Videos of This Horse
You need to hurry because only one share remains in Ballyvango , who possesses real quality and oozes class and is a half-brother to Ballymountain Boy whom Martin trained to win three races, as well as a fine placed effort at Cheltenham. He is sired by Ocovango, who is a young stallion whose first crops have already made headlines with good winners such as Langer Dan. Martin loves this youngster, who was bought for us as a foal by Gerry Hogan who has bought many top class horses for the yard in the past, such as Champion Court, Any Currency and Annacotty. Ballyvango was backed and ridden away at Martin Jones, who knows a top class horse when he sees one, and was hugely complimentary about this youngster., He has recently come into training and is already showing that he is a really exciting prospect. He will start in bumpers though ultimately looks a real chasing type for the future. Come and see him quickly before all the shares are sold.

CUT AND RUN 9YO MARE

Sire
Getaway (GER)
Dam
Somethinaboutmolly (IRE)
Sex
Mare
Colour
Bay
Born
2013
Watch Videos of This Horse
There are only two shares left in a newly formed breeding syndicate to own and breed from Cut And Run, a beautifully bred winning National Hunt mare, who has recently suffered a career ending injury. Cut And Run was bred by Zara Tindall and is out of a dam who has bred three winners to date including the very talented I K Brunel (winner of 4 races, official rating 140); and Somewhere To Be (won 2 races, OR 130). Cut And Run is also a winner and was placed in 3 further races. But now that her racing career is over, we have created a syndicate to breed from her, with KRL retaining half of the shares. This means that as well as owning a share of Cut And Run, you would also own a share of her foals. The keep costs will be £175 per month, which includes the cost of covering by a good class stallion. All income and any unspent keep contributions will naturally be returned to the partners. The syndicate will start on September 1st 2022 to allow Cut And Run time to recover from her injury on box rest .

Zestful 3yo filly by Postponed

Sire
Postponed (Ire)
Dam
Heart's Content (Ire)
Sex
Fily
Colour
Bay
Born
2019
This is a rare opportunity to take a share in a lease on a strong, stamina-laden filly who has had 4 runs on the flat, never finishing worse than 5th place and achieving an official rating of 70. She has been made available on a 2 year free lease with a possibility to extend if all parties agree. Zestful is a half-sister to the staying black type performers, Heartily and Harcourt Street. Her sire, Postponed, was a tough and top class performer who won nearly £5 million in prize money in his career where he raced until he was 6 years old, Zestful looks to have inherited the same stamina and durability – and looks to have a touch of class about her, as well. Initially she will go juvenile hurdling and, being a filly, will receive all the weigh allowances. However, she possesses the size and scope to jump a fence later on. She is a very exciting prospect. No capital cost is involved in being part of this syndicate. Such is the faith that her owner has in her, he has confirmed that he will be a member of the syndicate himself!

Sire
Sageburg (IRE)
Dam
Constant Approach (IRE)
Sex
Gelding
Colour
Bay
Born
2017
Watch Videos of This Horse
£1 a day gives you a share in a fabulous horse, with all costs covered for 2022. The Cotswold Lockdowners comprises 125 members who are guaranteed active involvement, lots of fun and a full share of prize-money . Bought by bloodstock agent Gerry Hogan, who acquired Champion Court, Any Currency and Annacotty for us. A strong, athletic horse by young stallion Sageburg who has already produced Cheltenham Festival winner Ch’tibello and top-class Rouge Vif. The winning dam is closely related to Graded winner Graphic Approach and Irish Grand National winner Feathered Gale. Finished 3rd in 3 of his 6 runs and has a very workable handicap mark. Act fast because, at the time of writing, only 5 of the 125 shares are remaining.

Sire
Black Sam Bellamy
Dam
Karmest
Sex
Gelding
Colour
Bay
Born
2019
Watch Videos of This Horse
Black Sam Bellamy unfortunately died relatively young. Superbly bred as a brother to Galileo, he sired many nice types such as The Giant Bolster, Sam Spinner and Sam’s Adventure. This youngster is one of his last foals and is developing very well indeed, thanks to the excellent care of Batsford Stud, just a few miles away from us. We trained his tough and most genuine full sister, Spice Girl, to win five races, and he is a half brother to another multiple winner. A beautifully natured gelding, he has been broken in and ridden away and will go into training in the Summer and is likely to be a forward type starting in bumpers this season. 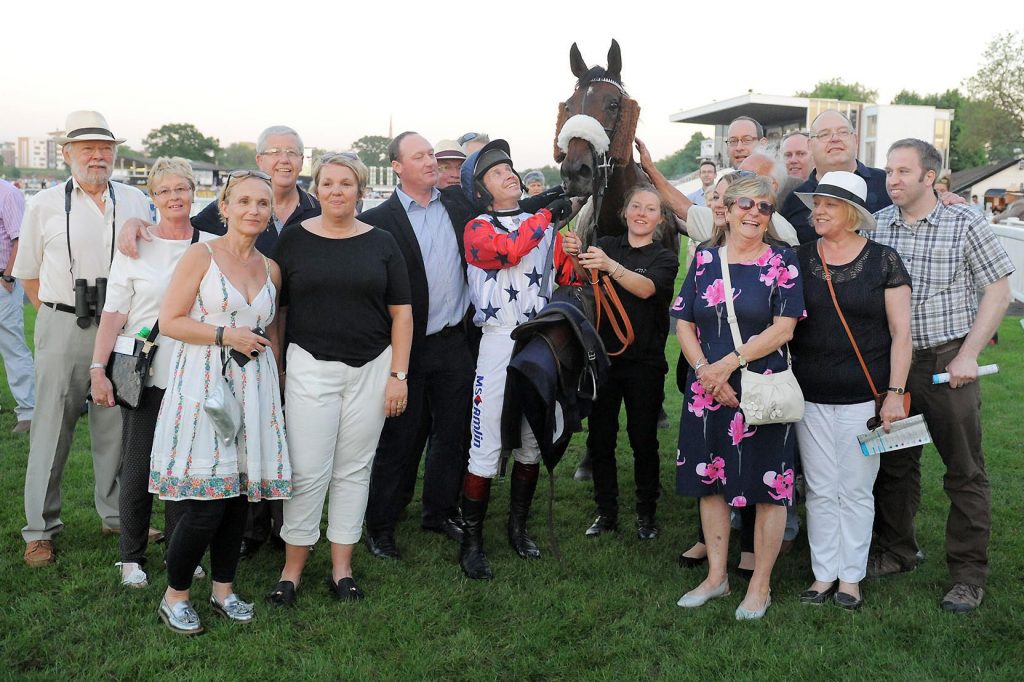 Our Racing Club has had great success with winners every season since we set it up a few years ago.  It’s an ideal entry-point into ownership and at just £1.50 a day, £42 a month or £500 per year, it really is a bargain.  The Club always has at least two horses in training and it provides a huge amount of fun for such a small outlay.