What a very special week we all had at The London International Horse Show at it’s new venue at Excel in London with Freddie racing his shetland pony Brewards Kerwen (Blackie) as part of the Shetland Pony Grand National Team. Thanks to my fabulous team at home, I was able to join Belinda, Freddie & Harry there after Ben Buie’s win on Wednesday and stayed until Monday afternoon only missing Monday night’s race. The team here ensure it all ran like clockwork so we could all have some pretty special family time. 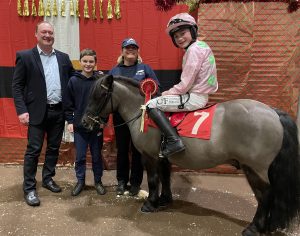 Freddie’s pony isn’t the fastest in the Team but he can occasionally pull it out of the bag and lacks nothing from the saddle as Freddie pushes & shoves him all the way! On Sunday afternoon he was a close 6th in front of Harry Skelton, Bridget Andrews and Sean Bowen however on Sunday night, with a packed crowd watching, they got a fabulous start and held off a persistent challenge from Lucas Murphy to win by a neck and make a dream come true for Freddie who has always wanted to win there. 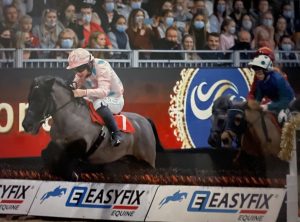 Judge Bob Champion called the result quickly and Freddie’s team-mates were all fistpumping him, such is the team spirit amongst the riders and the was then thrilled to receive his winning rosette from comedian Rory Bremner.

Thanks to Sebastian Garner and Vera Akehurst who work so hard to make sure the children have so much fun and to Freddie’s sponsors Cotswold Forage, NAFUK and Webblite and all the generous people who have sponsored him. He’s raised over £4500 for The Bob Champion Cancer Trust – fabulous. Plus memories that will last a lifetime.

Amazing time away but great to be home and a stunning red sky greeted us this morning.

Paul Davis, Matt Capp, Adam Meagher and Jane Berry have called in over the last couple of days to watch the horses on the gallops and bring some goodies and thanks to those of you who have sent gifts and money too – it’s so much appreciated by the team and much deserved too as they all work so hard day in day out.

Last night we had our yard Christmas Party but instead of a usual meal we decided to go to The Snowshill Arms and have a game of skittles as well as our Christmas Meal. It was brilliant fun, the food was delicious and, due to a bit of dodgy adding up by FBC Manby Bowdler’s Neil Lloyd and Belinda, the teams drew at the end of three rounds! Ummm think our team may have beaten their team……however! We then played ‘King Pin’ and it was the youngest member of the team, Harry Keighley, who was grinning the widest by going home with the spoils for winning that! Much deserved after being so supportive of Freddie over the past week, never complaining about long days and always smiling. Well done Harry!

PrevPreviousKazontherazz makes it 5 wins for us this week!
NextHappy Christmas!Next