Found On WINS at Cheltenham!

What an incredible day we had at Cheltenham on Friday with Ollie & Irene Ryan’s mare Found On jumping her rivals into submission to win in impressive style under a superb ride from Sean Bowen. She was awesome and Sean made it look easy on her – believe me she’s not the most straight forward over an obstacle but Sean gets on with her so well and makes it look straight forward!

Ollie & Irene have been lucky enough to have two Cheltenham winners already with their now broodmare Brillare Momento and Irene’s celebrations walking into that hallowed Winners’ Enclosure get better and better! Isn’t that type of celebration what it’s all about?! Thanks to our amazing support team who ensured we had another pretty loud reception from the Winners’ Enclosure – a sea of familiar faces, friends old and new who’d come to cheer us in – fabulous.

Fantastic to get on that Cheltenham Winners’ Board on the first day of the first meeting and amazingly we were the only Cotswold Yard to have a winner over the weekend at our favourite track. 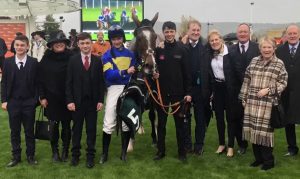 Spanish Present made his hurdling handicap debut in the race after Found On but Sean was never happy with him and neither was I watching…he simply didn’t run his race. He’ll be thoroughly checked out over the next few days and hopefully something will come to light. The ground, when I walked around again on Saturday before I decided to take Genovese out of the Bumper, was quick enough still so maybe he simply didn’t let himself down on the ground.

Saturday was a massive day for our family and for Freddie in particular as he has managed to win enough points to qualify Gavin & Suzanne Hughes’ lovely mare Miss Millfield for The Pony Racing Authority Final despite only racing together since the end of July. They’ve had a fabulous summer learning so much and, despite not winning a race, they improved with each run and were regularly 3rd or 4th giving them enough points to finish in the top 12 in the Country. His instructions for the Final were to just go out and enjoy himself as it was an amazing achievement to simply be there.

What a race! Despite worrying about the start as Miss Millfield was naughty at Chepstow on their penultimate start, Freddie surprised us by deciding not to be led in (which would have had to be in last place) and he stole 3 lengths at the Start (the Starter apparently said a lot looked like they were asleep and so he let them go a bit away from the tapes and a lot were literally caught napping!) and they were away. 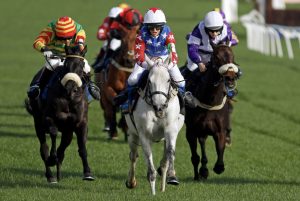 He set a decent pace without going a crazy gallop (godfather Warren Marston had told him riding work in the morning that it was a long way up that hill!) however they did look as if they were going to be swallowed up as they passed what would have been the final fence. However, Freddie never stopped pushing and Miss Millfield gave her absolute all for him eventually splitting some of the best ponies in the Country and beating plenty others, to finish 3rd, beaten just a length and a neck. She wasn’t letting anything else by and was staying on again at the line (needs further!)
An absolutely brilliant result and we were/are all over the moon. The reception he received all the way back up the walk-way and, again, by so many friends and supporters in the Winners’ Enclosure, was absolutely incredible.

I wasn’t happy enough with the ground for Genovese to run in the bumper and, even though they had rain showers in the afternoon before his race, my stick wasn’t going in far enough to be convinced any rain would make enough difference. Therefore, after discussion with his owners, we decided the right thing to do was to save him for another day. As The Duke used to say “if in doubt, pull them out”.

We also had a stand in the Hall of Fame over both days and huge thank you to all our fabulous team who offered to help man it and especially to Paul Davis who engineered it all, it was much appreciated. We have so many different options of ownership here that there really is something for everyone. Do get in touch if you’d like to find out more.

We had a busy few days with owners and visitors to the yard as well which is something we really enjoy during a Cheltenham Meeting. Do get in touch if you’d like to make a visit here en-route to Cheltenham at their November Meeting or even before then, we really enjoy people meeting our team and showing off our wonderful gallops & facilities.