Back On The Lash!

Thrilled to train our 2nd winner of the season yesterday at Ludlow when Back On The Lash virtually made all in the 3 mile Novices’ Handicap Chase to just hold on under a super ride from Sean Bowen for Mark Boothright. Ironically Mark actually bought him from the Bowen Family as Mark had a share in his mother, Giovanna, so hoped she’d passed on her toughness. The Bowen’s assured us they weren’t getting rid of him as he was no good and apparently the boys tried to persuade them not to sell him, but they wanted an extension and he was to help fund it!

Lash ran a blinder on his fencing and seasonal debut in the autumn to finish 3rd at Carlisle but has since had niggly problems so only managed to run at Cheltenham’s April Meeting where he found the ground a little lively and maybe needed the run too. Back over fences and with no obvious pace in the race we decided to dictate and what a ride Sean gave him, jumping with accuracy and fluency and never even having to resort to his stick. Listen to what Sean had to say afterwards here:
Sean Bowen describes how Lash won!

He mentioned a fall after he’d won…..Beth Whittle, who rides Lash out and looks after him (& adores him!) was so excited (we are sure we can hear her on the re-play!) she screamed with delight and threw her arms in the air to greet Lash and he whipped around and dropped Sean and promptly galloped off! You couldn’t make it up!

In the previous race Ten Past Midnight ran a good race to finish a solid 4th and there is surely a race to be won with him.

With Sarasota Star a non runner at Plumpton, just Miss Antipova represented us there under James Best. Sadly they got no further than the 2nd fence, the trappy 1st downhill fence, where she got it all wrong and fell. Not a nice fall and I hate to see mares, in particular, fall but thankfully both her and James were fine albeit they may be stiff in the morning. Her win must surely be just around the corner as she’s been so consistent and it would give me so much pleasure to train Alan and Anna Varey a winner as they are so patient and supportive and Vicki, who rides her out every day, deserves for her to win too! 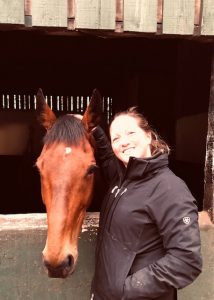 Two runners today at Southwell evening meeting. Mozzaro is a lovely horse who has just taken a lot of time but he’s learning all the time and when the penny eventually drops I’m sure he’ll give his patient owners a lot of fun. He’s a horse for the future and looks every inch a chaser.

Matthew Baker has his first ever runner in sole ownership having started in our Racing Club and then owned shares in horses before taking the plunge himself with Brianna Rose who runs in the mares’ bumper. She’s done nothing but please me and, although she will come on for the run, she’s shown plenty of promise at home and I think could surprise a few people.